Our fourth day in the Algarve was the most languid day of the entire trip. We had slowed down to a virtual standstill. The weather was perfect. There were many weeks of travel behind us and several weeks still lay ahead.

Ruby cooked a slap-up breakfast with eggs, mushrooms, spinach and other delights. We decided to let Susie sleep in because she was still very unwell. Ruby went back to Praia Dos Caneiros to soak up the Mediterranean sun on the sand. I stayed at the cabin to keep an eye on Susie and write this blog, whilst gazing out over the cliffs at the sea. When Susie eventually rose, I did my best to imitate Ruby’s Breakfast of Vegetarian Delights.

Whilst the food in Spain and Portugal is generally excellent, the options for vegetarians are very limited in bars and restaurants. This has been an issue for Ruby, who has been a vegetarian for some years now. As it happens, the markets and supermarkets are stacked with high-quality vegetables, cheeses and olives. Thus one of the advantages of having our own kitchen—no matter how small or how basic the equipment—is that we can cook good vegetarian meals.

We mooched around A Casinha all afternoon, soaking up the sun and beautiful views of the sea and the cliffs and that expansive, light-blue sky. After Ruby returned from the beach, we had a surprise visit from our neighbours. A Casinha adjoined another small cottage that was used as a weekender by a Portuguese family that seemed to consist of three of possibly four generations of women. The previous day, one of the older women wandered into our cabin and made herself comfortable on the couch.  A similar thing had happened to us many years ago at our house in Marrickville, Sydney, when an elderly woman wandered into the back gate. It took us all afternoon to figure out where she was from, and make contact with a relative. She had wandered off from her nursing home. On this occasion, we were unable to communicate with our surprise visitor at all, as the old woman could only speak to us in Portuguese.  We knew she was from next door, however, so we just smiled and acted like we were expecting her. At length, a middle-aged woman came to the door and apologised and ushered the old woman out the door. The following day, she brought us a plate of caracoles, or marine snails, and showed us how to extract them from their shells with a thorn from the top of an Aloe Vera plant—a species which was plentiful on the cliffs nearby. Here’s how it’s done:

First you snag the snail on the end of the thorn, and rotate the shell gently so that the snail comes out in one piece.

Then you put a few snails on a piece of bread… 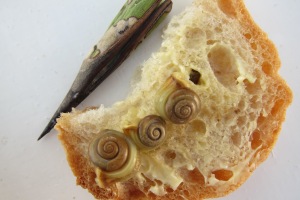 …and you enjoy them with your favourite afternoon beverage.

With a bit of practice—and a certain amount of bravado to overcome our instinctive reaction to what looked very much like small garden snails—we enjoyed the caracoles as a tapa with our afternoon drinks. We were touched by our neighbours’ generosity and willingness to share something special from their little slice of heaven by the sea.

That evening I cooked a pasta dish with olives and white beans that were flavoured with garlic and the wild thyme that I had collected on my walk across the cliff-tops the day before. Ruby wanted to go for a walk along the cliffs afterwards in the late evening, but it was too difficult to re-trace the goat tracks in the twilight. So she spent the rest of the evening watching a documentary on Susie’s iPad.

Susie had been sick for ten days and did not seem to be getting any better. After she she went to bed, I researched a couple of alternative diagnoses, but her symptoms were all consistent with acute sinusitis and they did not seem to indicate anything nastier. But just in case things did get suddenly worse, I made a note of all the contact and location details of all the hospitals in the Algarve.