On the morning of our second day in Córdoba we rose early to beat the heat. Our first destination was a graceful Roman bridge over the Rio Guadalquivir that was guarded by an angelic busker with a violin. On the far side of the river we spied parklands with inviting paths and gardens, but the heat was already cranking and we thought better of heading off on a long walk that would land us far from home in an unknown location in the middle of the day.

At the far end of the bridge we were accosted by two men who were interviewing tourists about why they had come to Córdoba. Our interview no doubt ended up on the digital equivalent of the cutting room floor: whilst our enthusiasm would have been abundantly evident, our spoken Spanish was barely coherent at the best of times, and it was even worse with a microphone in our faces. I let Susie do most of the talking, as she had been studying harder than me.

We decided to walk along the river towards the next bridge, the Puente de San Rafael, and cross back over the river there. We walked up a generous avenue in the newer part of the city, cleaving to the shady routes, until we reached the Avenida del Aeropuerto where we located a tapas joint that Susie had researched. It had the fine water-spray under the awnings, which was very welcome as the city was beginning to shimmer around us in the heat haze. We enjoyed a cool beer and some decent tapas, and eventually headed back to our apartment in the old city for a siesta.

In the late afternoon, Susie went shopping in search of shoes and an extra suitcase in the air-conditioned palace of consumerism, El Corte Ingles. I visited the Alcázar de los Reyos Cristianos (the palace of the Christian kings), which was located on the far side of the Mezquita. I explored the towers and the cool, pleasant interior of the Mujédar architecture until it was safe to venture out into the gardens, which were formally laid out with ponds, fountains, fastidious topiary, and a statue celebrating one of the successes of my namesake, Christopher Columbus. The photo below shows a view of the old Roman bridge from one of the towers in the Alcázar.

Around 7:30 I traced the wall of the old city and entered the Puerto de Almodovar to meet Susie at a bodega in the old Jewish quarter. Our plan was to sample a local fortified wine which we knew only as ‘Ximenez’. The name of the locality is dripping with irony and sorrow: in the Fifteenth Century, the Catholic monarchs of Spain offered the Jews of Córdoba a choice of conversion to Catholicism, death or exile, so the Jewishness of the quarter is largely historical. We saw evidence here and there of attempts to renew Sephardic culture. That would be quite an achievement after 500 years of erasure.

My nose confirmed the address of the bodega: it was marked by a heavy wooden door that exuded a stench of fermenting grapes. Unfortunately, the door was also decidedly locked, so when Susie arrived to meet me, we headed deeper into the Jewish quarter in search of an alternative venue. On the way we passed a plaza named after a learned and accomplished Jew who was forced into exile by Catholic persecution: Maimonides.

We chose a place that might have been called ‘Kentucky Fried Tapas’. The eggplant and squid were deep fried in a heavy, unforgiving batter. You could almost feel your coronary artery filling up with plaques as you ate. The bullfight on the television and the try-hard Spanish decor were warning signs we should have heeded. When a busload of tourists arrived, we headed for the door.

Walking around the old city was something we never tired of, so we did it again. Susie booked a session at a traditional Arab bath, and keen not to repeat our most recent culinary adventure, we searched out a restaurant called Casa Rubio that had been recommended to us by our host, where we had an early dinner (9:30-11:00pm). In order to compensate for previous disappointment, we ordered tapas of fried eggplant and fried squid, with a salad of tuna, tomato, green pepper and onion. For seconds we ordered a local speciality—oxtail. This was really excellent, and on top of the friendly service and relaxing, unpretentious decor, it restored our mood.

As we weaved our way home through the capillaries of the Jewish quarter, we stopped at a bodega near home to sample some sweet Ximenez. It took a moment to pinpoint the taste, but the verdict was unanimous: alcoholic sultanas! 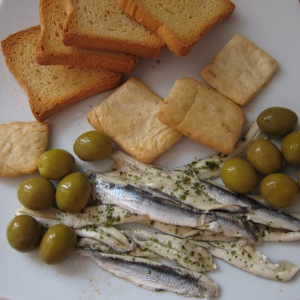 Home-made tapas of bocarones and olives, enjoyed on our patio in Córdoba.