We stayed in the Charlie Moorland Camping Area for the next three nights.  The first day we were there, Susie went into Eumundi markets.  Ruby and Clare stayed back with me and we went on a long walk through Kenilworth State forest.  We saw different types of vegetation as we went, including rainforest, hoop pine plantation, and dry sclerophyll forest.  The rainforest was lovely, although it was only a remnant.  There were information boards along the way that read like slightly defensive propaganda in support of hoop pine monocultures.  Clare and Ruby were very talkative and drew me out on all sorts of topics.  It was all I could do to get them to look at the trees.

During the rest of our stay we ate well and mooched around our campsite, which was in a far corner of the camping ground.  One of the charms of the spot was the animal life: it was like a zoo with rotating shifts.  First thing in the morning the bush turkeys would be scratching about. Then the kookaburras would arrive, along with the magpie larks and other birds too numerous to mention.  Later in the morning, as it warmed up, the reptiles would appear, and there would be three goannas sharing the site with us.  As the evening came around, we would catch glimpses of a very small wallaby-like creature, and several rat-like creatures—probably antechinus, a small marsupial. Each evening we would also get regular visits from Russell the Bandicoot, so-called because of the noise he made amongst the leaves.  There were also many possums with pouches full of impossibly large offspring.

Overall, Kenilworth State Forest was a lovely stop.  It was shady, the walks were great, we could have fires every night, and other people camped at a respectable distance.

We pulled out rather reluctantly, but the looming school holidays in Queensland meant that we had to think about crossing the state border soon, so we needed a plan. We had a couple of contacts that our friend Susan Feez had given us. We decided to give them a try, and if they weren’t around, then we would just head south as far as we could go.  We called Judy Venn at Palmwoods, who promptly invited us to stay, saying that she was expecting us.  She also recommended we visit Kondalilla National Park on the way.  So we had a plan.

First we drove to Maleny, which Suz and I had visited many years previously when it was the home of a Folk Festival that later shifted to Woodford.  Susie loved the place, but it was full of chintzy hippy shops.  Even the Strasburg from the local supermarket was disappointing.  Suz pottered for what seemed like an eternity in the local op shop while I browsed in a book shop that was vaguely interesting provided you ignored the spirituality section.

Down the road we soon came across a picnic spot with a view from the ridge right out to the ocean many tens of kilometres away.  We stopped there for lunch, and that provided a partial remedy for my unspiritual mood.

After lunch we drove to Kondalilla National Park, and parked the car and went on a lovely afternoon walk that took us through rainforests and past rock pools right down into a valley, from which we walked out again via a different route, thankfully less steep than the one we took on the way in.  Clare talked her head off the whole way up, as she is wont to do on long walks.

From Kondalilla we followed Judy Venn’s directions, and descended the scarp down a narrow winding road from Montville.  The latter is a another chintzy looking town with possibly the best views in Queensland.

We found Judy’s house and stopped to pick mulberries from the tree by her gate.  She instructed us to do this, as a pie was planned for that evening.  Ruby and Clare introduced themselves to Judy’s dog, a golden retriever.  In time, Judy turned up.  She was very welcoming.  She showed us up to the house, allocated us some beds, and eventually we sat down on her back veranda for a drink.  Her house was located at the foot of the scarp, but it was high enough to have a commanding view down the valley towards the ocean.  There was a small pool out the back of the house, and the house itself consisted of two structures joined by a walkway. The original dwelling was a fairly plain bungalow. The newer structure was an architect-designed house with a curving roof and an open plan mezzanine floor.

Judy made baked potatoes and I made salad dressing and cooked some steaks of the barbeque, and we all sat down to an enjoyable meal.  (I’m much more comfortable crashing in on other people’s lifestyles at short notice if I can commandeer their kitchen and cook them a meal.)  We stayed up talking to Judy until all of us started looking bleary, which wasn’t very late.  We were tired from our walk in the rainforest, and she was in training for a 111 km paddle up the Hawkesbury River in a kayak.

The next morning, Susan supervised the kids whilst they did some schoolwork, and I worked on a curry and a dhal.  We had planned to drive down to Brisbane that evening with Judy.  She had a practice run in the kayak scheduled in the evening, and would be staying in Brisbane with Robbie, the sister of Heather and Keith Chandler, who had kindly taken us five months earlier in central Queensland.  We were invited too, although it was unclear how we were going to fit into the schedule.

Late that morning, Judy drove off with her son Rafael.  Susie and I packed and tidied up a bit, and then set off south on the Bruce Highway to Brisbane.  Susan wanted to stop at the Big Pineapple on the way down to re-live some childhood memories.  Susie was quick to highlight some redeeming educational content, but basically it was a tourist trap full of awful souvenirs. 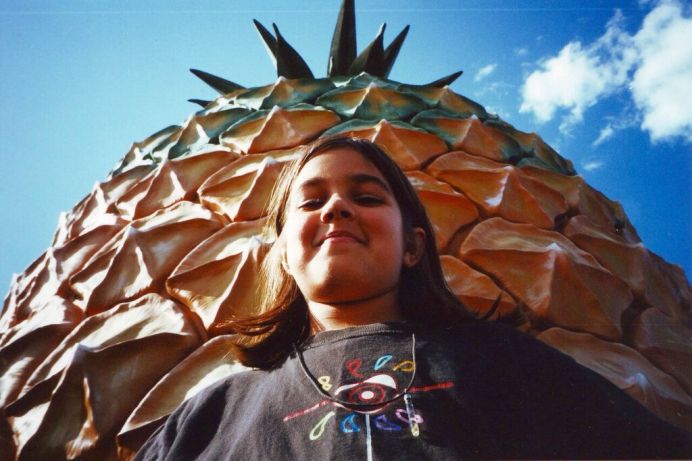 Ruby at The Big Pineapple