Our second night in Córdoba was a troubled one. We got a message from our daughter, Clare, who was upset about some disappointing marks she had received for some of her university work. Also, I was visited by night terrors. Susie was so concerned about my agitated state that she woke me and—thankfully—rescued me from Room 101.

Later in the morning Susie went to the Arab baths for a relaxing massage and I stayed back in the apartment and wrote in air-conditioned comfort during the heat of the day. After siesta, Susie worked on her “librito”, a small book full of tickets and miniature maps which has been gradually expanding throughout our journey.

We emerged onto street around 6pm when the temperature had dropped to 38°C, and we went to the department store to buy a suitcase. We needed the extra space for the stylish Spanish dresses and shoes that Susie has bought. She has been very selective, but when we are re-united with the luggage that we left with our host in Madrid, we will need more room, as Susie brought only a small pack from Australia—small enough to take aboard a plane as hand luggage.

We finished the day in style with dinner at another restaurant that had been recommended by our host. It was called La Fragua. When we arrived, we were the only customers. The main eating area was an ancient, narrow courtyard, and the tables were fashioned from a curious hardwood that had quartz stones set into it. We had seen this kind of wood in the El Rastro markets and wondered what it was for. The waiter told us that it was traditionally used to thresh grain.

I was happy to spy Dourada on the menu, but the waiter talked me into trying a different variety of fish called Borriquete. This turned out to be an excellent recommendation, and Susie and I enjoyed a secluded and romantic dinner. Later, after a few more diners had joined us, we went out for some late tapas and a drink at Taberna el Picoteo del Gallo. It was the perfect evening to cap off a brief sojourn in what turned out to be our favourite city in Spain.

I’m still not sure why we were so absurdly happy in Córdoba. Was it because the city is impossibly romantic, or was that simply our state of mind? I suppose the cause doesn’t matter so long as the effect stays with us. 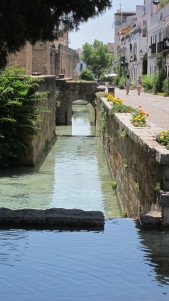