We left the hostel at about 8am to get a bus to Auroville, a town about 150 kilometres south of Chennai. For the first time since our arrival, I felt one hundred per cent well. No jet-lag and no tummy troubles. And just as well, really, considering the travelling we had to do that day. Joining us on our bus ride was Eloy and a Norwegian named Sunniva (or Sunni for short). In the organised chaos that is Indian public transport, we managed to get a bus to a nearby interchange and then onto another bound for Auroville. The bus was packed with travellers. The fare collector took pity on us and ushered us right to the front, where we could pile our bags and perch on a “seat” which was in fact a cover over the engine. It was about a million degrees. My bum got well and truly cooked, but it was kinda worth it for the excellent view out the front. 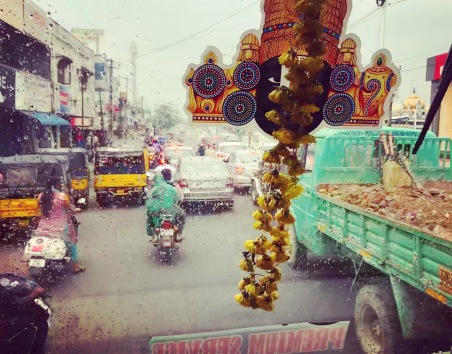 It rained for a lot of the trip. The cityscape quickly transformed into a long highway. My heat stopped every time a bus hurtled towards us on the wrong side of the road, seeming to miss us by only a fraction each time. The trip was punctuated by a brief stop in the middle of nowhere, where I paid ₹5 to use a very public toilet where no cubicle had a door and the walls were one metre high (essentially decorative).

Once we arrived in Auroville, the four of us were famished and went into the first restaurant we found. We ordered “meals”, also called “Thali”. It was a platter of rice (often served on a banana leaf) accompanied by a range of delicious sauces, curries and pickles. It became my favourite Indian meal. It was the first time I’d eaten with my hands and it was fun, scooping up the sloppy rice.

Dan and I farewelled our friends for the time being and hopped into a tuk-tuk. I had convoluted instructions in an email to get us to an AirBNB somewhere a little way out of town. Our driver got us as far as the Auroville Botanical Gardens and we walked the final kilometre along a wide dirt path which snaked through tall grass. Cows chewed their cud lazily in the paddocks.

The instructions turned out to be excellent, and after only one wrong turn we were at the gate to the Skandavan Inn. The moment we walked through, we knew we’d hit the jackpot. Red paths weaved themselves through delicate greenery, the backdrop to a chorus of birds. In the centre of the garden, the paths converged at four dainty bamboo archways decorated with vines. We discovered our host was an architect and had designed the entire space. Our room was the ground floor of a tall orange building at the back of the property. It was clean and cool. The shower had curved walls and no roof. There was a pond with big orange fish swimming about. Everything about the place was gentle, peaceful and zen.

After settling in, we set off on another of our long walks in Auroville, but had a hard time finding its centre. It turned out not to really have one, unless you count the Visitor’s Centre with its three fancy boutique shops, and propaganda “gallery”. Auroville is a strange place. It’s a community of internationals who’ve dedicated their lives to achieving divine unity (or something). In the 1960s a spiritual leader known as “Mother” founded the city, and people from dozens of countries brought earth from their homes to put into a lotus-shaped urn. The idea of the movement (cough cult) is to shed property and possessions and use meditation to achieve one global consciousness. Aurovillians reject the idea that they’ve formed a religion, instead framing it as a ‘way of life’. The whole thing is equal parts amusing and spooky, with a splash of something plausible. It was getting late when we arrived at the visitors centre, but we snuck in a sandwich and a soy chai tea (both overpriced but excellent) before heading home for the night.

The next morning we managed to land ourselves a moped through a contact of our host. Dan felt confident enough to drive it and he did an excellent job. I wished we had helmets, though. We had peanut butter toast and coffee, then hopped onto our bike and chuffed back into Auroville. From there we walked an easy one kilometre to the place with the best view of Auroville’s pride and joy – The Matrimandir. This is an enormous golden chamber where Aurovillians and visitors go to meditate/ concentrate. Unfortunately we couldn’t get tickets to go inside, but the promotional videos we watched gave us a good idea, and it seemed amazing. The middle of the chamber contains a crystal ball which catches and diffuses sunlight, and acts as a focus point for meditators. It was worth checking out even from a distance. 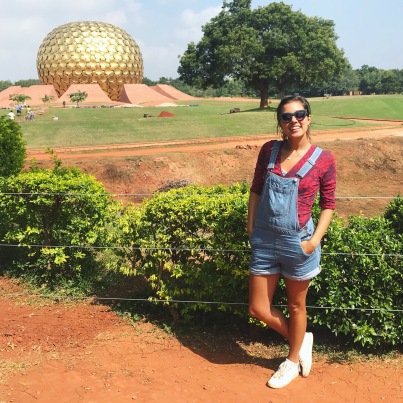 I bought a couple of linen tops from a boutique, had one more cup of soy chai, then we were off. We found an ATM, then checked out a couple of places for lunch. I had an excellent platter of curries and naan. I even braved the fresh garden salad and a banana/spinach smoothie. After food it was back to our little cottage for a shower and chill time. Then came an adventure that I disapproved of even as it unfolded, but is if nothing else a great story…

We rented a moped (it’s really the only way to get around Auroville) and decided to drive to Pondicherry for dinner. What started off as wide dirt roads through the countryside turned into little alleyways, which became roads… Then a highway… And all of a sudden we’re in the middle of full on Indian traffic, and panicking, Then the scooter dies, so we drag it to the side of the road, run around looking for petrol as the sun sets, finally find some and buy a bottleful, get back to the bike, fill er up, and somehow weave our way back through the chaos and home again, getting lost along a couple of goat tracks in the dark on the way. We never made it to dinner.

Needless to say, Dan spent most of the rest of the evening in a relieved daze, shaking his head every so often and exclaiming ‘my god, we’re alive’ or ‘that was insane.’ I felt equal parts thrilled and guilty. We fell asleep with the windows wide open and the animals of the night singing us to sleep with buzzes, shrieks and whistles.